The process from the bamboo stem to the prefinished flooring involves several processing phases; in brief these include:

• sawing the bamboo stem which comes from the forest (just five to six year old plants, which are straight and round with a height of 15-20 metres, and which are 25-30 cm in diameter);

• only the first half of the plant is used, which is the thickest one; 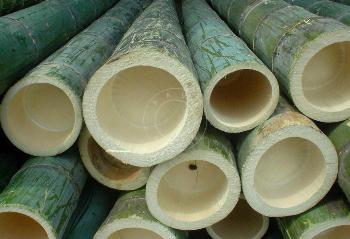 • the entire culm is split into two equal parts, so that it can be shaped into two crescents;

• both parts which have been cut are then heated and flattened to form a straight axle generated from the entire half of one plant;

• unlike the material used to manufacture a parquet in classic lamellar bamboo, this procedure removes the inside nodes, however it leaves the green part intact, as this will form the outer part of the parquet on which people walk;

• the slates which are created are treated so that all of the nutrients, sugar and insects can be eradicated;

• at this stage, the slates are conditioned and acclimatised for a few weeks which allows them to reach the correct humidity level (below 10%);

• the strips will still be allowed to rest for a few days so that they can continue to stabilise after they have been dried;

• you can then select the best boards; the slates which have been processed are ready to be assembled into a whole slat; the board is formed of three crisscrossed layers of flattened bamboo, all of which is the same material;

• the parts are subject to hydraulic pressing, which in turn forms an axis with a typical full-length bamboo node;

• the axles will continue to rest for at least one week, which will provide them with maximum stability for this core; the heads are the cut off so that the slats are of the required length;

• the male-female interlocking is generated on the four sides of the bamboo slats so that they can be laid with adhesive;

• the surface of the boards will now be treated with a basic parquet wax made by the Swedish company Sherwin-Williams – see safety data sheet -;

• the prefinished bamboo strips are packaged and dispatched after one to two days. Every stage of bamboo parquet production is interlinked by adjusting the relative humidity level of the wood in drying rooms owned by the Italian company Nardi, which allows them to reach the level of moisture required.