LITTLE KNOWN PLANT TYPE FEATURES AND THEIR LINKS TO THE ECONOMY

“Bamboo” is a synthetic term which specifies 70 different types of large wood grasses; the size ranges from 10 cm high (a dwarf bamboo) to 40 metres in height (a giant bamboo). Bamboo exists as an autochthonous species all over the world, apart from Europe, where there is still some bamboo from other parts of the world.

Bamboo as an economic resource is now an important monetary item for a number of countries: with over 20 million tons of annual production, most of which is produced in tropical countries and countries which are not rich, while they produce something like 1,500 bamboo products, all of which are very different from one another. 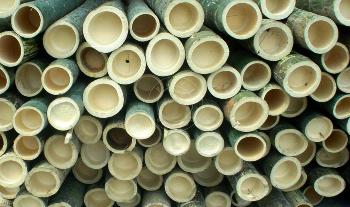 Unlike other raw materials, which are simply “raided” in poor countries (this is one of the reasons why they are poor!), bamboo thankfully is a resource which generated real work and wealth to the nations where it is harvested and worked upon; it is a material which is lost quickly if is not treated appropriately within a few days of it being cut, meaning that the entire processing phase and subsequent cutting will take place at the same time as the harvest; this clearly has just a positive impact on the local economy, without considering the the remarkable fact that intensive bamboo cultivation (this does occur albeit rarely) and it covers a fraction of field space compared to those used for other natural resources. It is a plant which grows alone without the need to follow up work or fertilisation.

Bamboo has a number of elements in common with trees, perhaps merely because it generates chorophylline photosynthesis and is made from lignin and cellulose; for everything else, it does vary from wood in terms of its internal structure, its behaviour, its regrowth, its life cycle etc.
From a structural perspective, it is rich in fibre, which determines its strength and hardness; mechanically speaking, the fibres are small tubular, hollow shafts with a diameter of 0.03 mm, a maximum length of 3.5 mm and a wall thickness of 0.006 mm. The fibre wall consists of layers, called blades, of which there are seven in bamboo and three in wood. The blades enclose the vessels which give the plant its nourishment. Whenever you cut a bamboo cane widthways, you will notice a series of dots (these are the fibres) which are immersed inside the bamboo pulp; the more fibres in the same area, the more resistant the bamboo. In addition to this, the fibre density varies with the height of the culm; the more you go towards the top, the more fibres there are, and the plant, combined with the fact that it tapers more and more, benefits from greater resistance to the wind. It is interesting to know that the exterior wall of the bamboo plant has almost double the hardness of the interior wall and this is used as the “upper side” in flooring. This is recognised by the fact that the pulp in which the fibres are immersed is slightly darker in close proximity to the harder part, and becomes white as it moves towards the inside of the cane.

Bamboo differs from wood in terms of how it behaves: it changes its leaves once every two years and this happens not in autumn, but during spring; in addition to this bamboo blooms once in its entire life cycle, that is once every 70-120 years; flowering can last for two to three years, before the entire bamboo tree then collapses completely and dies.

Some elements from “Structural bamboo” by Marco Fabiani.