Thanks to their particularly low VOC (Volatile Organic Compound) emissions, Pavibamboo bamboo flooring helps to maintain good indoor air quality. What does this mean? LET’S TAKE IT STEP BY STEP.

In general terms, the air quality of indoor surrounding is always slightly poorer than outdoors, because it remains an enclosed and less well ventilated environment, even when the air changes by opening the windows. But what is it that makes air go stale? Why do you need to inhale fresh air from time to time? Two factors cause the air to deteriorate:

– the presence of bacteria or mould, mites, pollen, parasites, insects and various micro-organisms;

HOWEVER, WHAT ARE VOCs?

VOC is an acronym for Volatile Organic Compounds; the are molecules of various natural carbon-based molecules, and are always present in the form of chemical residue in amidst air in closed surroundings, which is emitted by an entire group of objects around us. There are various types: aliphatic hydrocarbons (including methane, butane, limonene), aromatic hydrocarbons (including benzene and toluene), halogenated hydrocarbons (including chloroform and pentachlorophenol among others), aldehydes (formaldehyde, acetaldehyde, etc.), terpenes (non toxic floral perfume), alcohols (ethanol, methyl alcohol and ethyl alcohol), esters and ketones. There are also other VOCs which are predominantly unknown and very difficult to detect.

WHY ARE THEY HARMFUL?

If present in high concentrations, VOCs are considered among the major causes of indoor chemical pollution; some are considered carcinogenic, and for this reason the OMS has identified that there should be no more than 0.1 mg of VOCs per cubic metre of air. It should be said that most of them are released more intensely during the first five months and then decay over time, except for formaldehyde which has consistent release spells. The heat during summer causes more emissions than during the cold of winter. When they have a significant presence in the air, these substances can cause a variety of disturbances, including irritation, problems with the nervous system, breathing difficulties, headaches, and to organs such as the liver or lungs. In particular, the elderly, children, and people who suffer from asthma and heart and lung diseases should be more careful when it comes to surrounding themselves with objects prone to causing more indoor pollution.

HOW DO YOU DEFEND YOURSELF?

– the best remedy for certain is to ventilate the premises regularly and properly; changing the air inside he rooms caused all of the harmful substances which have developed over time to become diluted thanks to the supply of fresh air; in addition, the parquet is an item of furniture which needs to “breathe”, especially nowadays where it is not uncommon to install windows which while they are well insulated from the cold and noise, only allow a slow, albeit constant change of air;

– use household appliances correctly while also ensuring they are serviced;

– the third remedy consists of surrounding objects with low volatile organic compound emission; natural and ecological flooring such as a bamboo parquet which is treated in the factory with high quality resins and finishes, may provide a genuine solution here. Low VOC emissions (these may be omnipresent, but minimal) will help maintain a healthy, fresh indoor environment.

VOC EMISSIONS ACCORDING TO STANDARDS

There are a number of standards around the world which regulate VOC emission thresholds: these are occasionally compulsory (as in France, Germany and Belgium), or may be optional; some countries which have issued standards regarding the aspect of indoor air quality are: United States, Japan, Hong Kong, France, Germany, Belgium, Switzerland, Denmark, Sweden, Lithuania, South Korea and China. The thresholds and VOCs in place are not the same for all countries, and indeed the legislation in force varies considerably.

Our customers know that we process our parquet in the best possible way and pay particular attention to the adhesives and finishes used during production. Back in 2015 we had an idea to test a piece of material originating from a standard production batch to see if it was in line with the limits set by some reference standards. The best is based on “French Regulation” standards which are compliant with UNI EN ISO 16000-9:2006 + ISO 16000-6:2011 European standards. The French Regulation has been mandatory for some products sold in France since 1st January 2012. The detection of Volatile Organic Compounds carried out by the European notified laboratory Catas SpA, based in San Giovanni al Natisone was completed following a 28-day trial in a special chamber.

Have a look at the certificate

The tests uncovered a particularly low emission of harmful substance, as can be seen from the following chart: 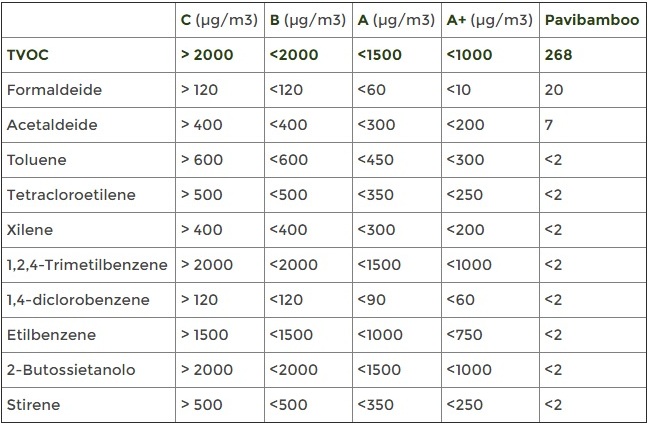